Homer was a Greek poet. No doubt about it. So was the Trojan horse, Greek. Right?

This afternoon I received a press release from Bahrain Economic Development Board with regards to the performance of Turkish dance Company “Fire of Anatolia” in view of Bahrain’s Spring of Culture on the 28th and 29th of March.

I was infuriated with the part where it is stated:

The show portrays the legend of Troy, written by Anatolian poet Homer in his masterpiece the Iliad and the Odyssey in 1180 BC, and hailed as one of the most known compositions in the world. 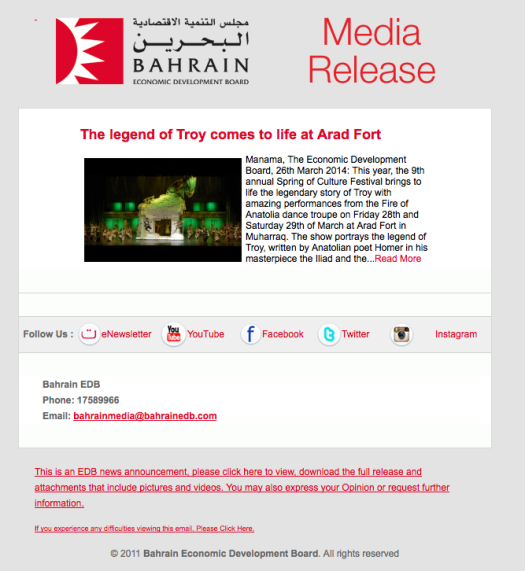 I didn’t need to be a university student at the Hellenic Civilization Faculty of OUC to agree with the fact that Iliad and Odyssey are (two actually not one!!) of the most known compositions in the world. BUT THEY ARE KNOWN TO BE GREEK!!!! Of course in the PR there is no mention WHATSOEVER about Greece. And I am wondering since when Homer became “Anatolian”? Who are these ignorant people who wrote this Press Release?

So let’s get things straight, shall we?

Irrelatively where HOMER was born (there are several claims about his birthplace):
1. The world back in HOMER’s time WAS NOT the same with the world we live in today. So weren’t the borders.

2. HOMER was a GREEK poet and his epics are INTERNATIONALLY RECOGNIZED AS Greek. It’s a FACT. Open a History book you guys!

Bahrain Economic Development Board should apologize to the Greek Community in Bahrain as their Press Release is offensive and ridiculous. As for the turkish dance company I really don’t want to believe that the artists are that illiterate not to know basic History. But as a friend put it on my Facebook post: “Definitely they’re not, we can let pass d silly things like coffee and sweets.,etc but when it comes to a whole History, well, am Moroccan but would say : Basta !!“

Update: The provocation goes on, the latest from Spring of Culture’s Facebook page: “In the words of artistic director Mustafa Erdoğan, Troy “is not only a show, it has a historical claim…telling the world about the legend of the Trojan War, Anatolia’s culture and mythology.”

First it was Homer’s nationality, now the Trojan War is Anatolia’s culture and mythology.

Note: The post was updated with screenshots as Bahrain Economic Development Board has corrected their Press Release to read: “Poet Homer”. Please check our Update: Homer Anatolian? Epic Fail!

The end of an era, the dawn of a new… #newbeginnings #santorini #motivation #lifestyle
🌺Gimme a kiss🌺
Day-7